Austin, Texas - another city, another fixture, another win, another hangover. Good times!

Once again I'm in another of the country's best cities for food, drink, culture and good weather. Whilst I've been here the temperature has consistently been in the low 30s (90s for you farenheiters). Austin is a city that I could quite happily live in, it has everything for everybody; loads of culture, great festivals, favourable living costs, low crime rates and some of the best urban parks in the country.

The Austin Gooners have made my stay here really enjoyable, to the point where I've decided to come back to the city next week (after Dallas/West Brom) to relax for the international break! This city (and the people living in it) really is that good. 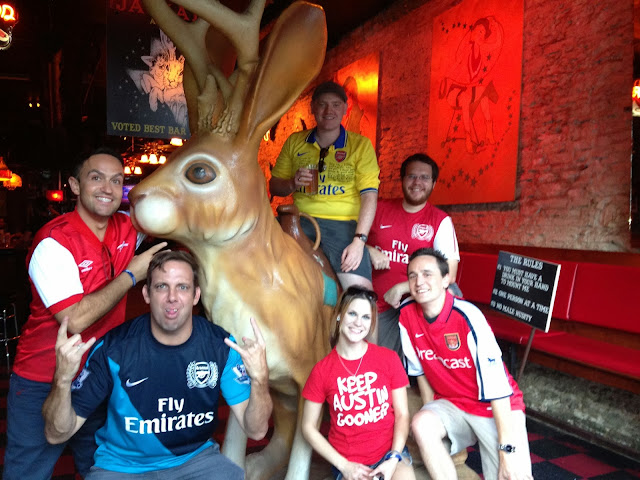 The Austin Gooners watch their games at the Tavern, having switched from Cuatros in order to provide a better experience for the supporters club members. The turnout for this mid-week UCL match was in the thirties, once again an impressive number given that these games kick off at 1:45pm local time, when most people are still 'working'.

Of course, with Arsenal going on a shoot-to-kill rampage in all competitions, people are coming up with all kinds of excuses to take a few hours out from the office to watch the team tear apart our opposition, and once again the fans weren't disappointed. We got to see Melvin Orwell bag his first goal for the club, a goal that no matter how many times you watch it, you still ask yourself "how did he do that?". It ain't easy, that's for sure! He later went on to assist the Good Looking French Guy. Suffice to say, he's only been here for a month and already he's playing like a fan.

If you want to donate, please do so here. And remember, it's for a good cause; if you read this blog and you enjoy doing so, you can donate as little or as much as you like. Something is always better than nothing!

Thanks for reading and COYG!