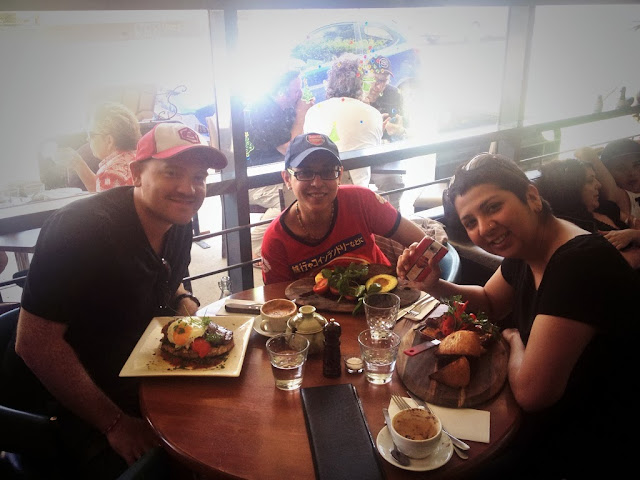 Meet Kanika & Diya, members of the Gooner Family and my hosts for New Years Eve in Sydney. They both moved to Australia from Delhi in 2007 and have been Arsenal fans for a while.

Q. Why Arsenal?K: A lot about the way they play, the style of play. It's poetry in motion, it's like Tiki Taka with attacking flair. Ever since I've started watching Arsenal, no other team has matched them. It's the way it should be played.
D: There's a sincerity about them, they're a very honest football club. I think Wenger's philosophy rubs off on the entire club. We're not crass, we're class.

Q. Started Supporting Arsenal?K: 1998 or 1999, I can't quite remember. I was first a football fan, I remember the 1986 World Cup, and had always enjoyed football ahead of other sports. It was around about 1998 when they started playing Premier League matches on TV over in India, and I just remember being attracted to the way Arsenal played.
D: I was a cricket fan first and foremost, I met Kanika in 2004, she got me into football as a whole, the first game I watched on my own was (what would have been) the 50th Invincibles game against Man United. My brothers are United fans so it didn't make things easy for me.

Q. Favourite Player?K: Robert Pires. This guy popped up at the right time all the time. He was so fast going down the flank. He made Thierry Henry look good with his support play. He was a workhorse.
D: Bacary Sagna. Somehow I just feel better when he's in the team. I really hope he signs a new contract.

Q. Favourite current Player? K: Per Mertesacker. He leads by example, he breathes Arsenal, I love the way how he bosses people around.
D: Apart from Sagna above, I'd also have to go with Per Mertesacker.

Q. Favourite Arsenal moment? K: When we qualified for the Champions League final in 2006 against Villareal. I remember crying when we had gone through. I was ecstatic.
D: It was the last minute header from Thierry Henry against United in 2007 at The Emirates. I remember that experience more than any other. The crowd went wild.

Q. Where do you watch Arsenal in Sydney?K&D: Mostly at home as the games are on late here. We were both at the Armoury for the Aston Villa game, there were hundreds of fans there.

Q. Emirates or Highbury?K: I'd have to say Emirates for the capacity. I've spent more time watching games there.
D: Emirates.

Q. League Prediction?K: Win. I say that with a lot of fear in my heart!
D: Same! Not the Champions League, I think they'll get knocked out but will be able to concentrate more firepower on the league.

Q. Who will be Arsenal's player to watch for the second half of this season?
K: Podolski, he's going to score some crackers!
D: Our new striker that we sign in the January transfer window!

Sydney. Is there a more iconic place to bring in the start of a new year than this place? I had put my round-the-world itinerary together with the purpose of being in Sydney Harbour on New Years Eve, where the best pyromaniacs in the business create a fire and light show in front of a million and a half party-goers. It's a once-in-a-lifetime experience, but it's something you'd probably be more than happy experiencing just once in your life anyway, because the whole of the downtown area is jammed full of people wanting to witness the same thing as you. It meant, for me and many others, an obstructed view of the Harbour Bridge, from the wrong side, and no view of the Opera House whatsoever. As most of the premier viewings spots had already been taken up, with people camping in the early hours for the privilege, people had to settle for next-best. The firework display itself was still very impressive, and it means a lot to say I was there in person, but once is enough. And I'm glad that I didn't pay $600 for a boat ride that lasted all of an hour. That's just ludicrous.

With another important Premier League clash comes another late-nighter in Sydney. January 2nd at 2am, to be precise. I returned to the early morning venue of choice, the Star Casino, to watch Arsenal beat a stern Cardiff side at the Emirates. There were eight games on in total, all being aired simultaneously at the Casino Sports Bar. There was a handful of Liverpool supporters, probably five in total, and a couple of Villa fans too. We, the Arsenal, had around thirty or forty. Sydney really is predominantly red and white.

The game was a hugely frustrating one to watch for the majority, we just lacked that bit of sparkle in the final third, and credit to Cardiff for doing a good job at shutting up shop up until Nicky Bee finally broke the deadlock, before immediately going off injured.

Podolski, who started his first game in more than three months, looked out of ideas for the majority of the game. I'm not saying that he can't play up front, but he needs the right kind of service and probably more match practice before he can pull it off, especially if he's up there on his own. He doesn't have the physical attributes to boss central defenders in the same way that Giroud, or even Bendtner, can. With the way we've utilised Giroud as a target man, does Podolski have a future at Arsenal as a centre-forward? I think we all know he's better on the wing, or even potentially in a number 10 attacking position playing off a stronger forward like Giroud.

So, we're nine out of nine, it's been a congested festive season with mixed results against some tough opposition, but we've come through Christmas and New Year on top of the table. The next few weeks are going to be just as testing, both on the pitch with important games against Spurs, and the will-he-won't-he saga of the January transfer window. Let's hope we can keep the momentum up and pull away from the two sugar-daddy clubs and that man-eater.