Meet Jeff Werner, my host in Boston and the guy that, amongst juggling a million other things in his personal life, helps keep the Boston Gooners ticking over. Despite having a whole host of important errands to run during the time I spent at his place, he still managed to make me feel at home and took me on a crazy guided tour through Downtown Boston and Cambridge, letting me snap away to my hearts' content. Suffice to say, if it weren't for Jeff I wouldn't have got to see anywhere near as much of Boston as I did. Yes, it was at a frantic pace, but when you don't have much time and you have to contend with Boston traffic, I think he did a fantastic job, so well done Jeff!

Q. Why Arsenal?
Just for the approach and classiness exhibited by the club. They're commendable and worthy of emulation and of course they are supremely enjoyable to watch. The club conducts itself very well and sets a great example to others. 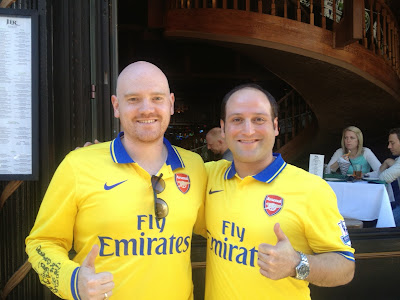 Q. Started Supporting Arsenal?
1997/1998 season because I was playing FIFA 97 or FIFA 98 with my friends and I recognised the name Dennis Bergkamp and it stuck, I think it's because he was the best player on the game. That did it for me.

Q. Favourite Player?
It's difficult to say, I would probably pick Tony Adams because he was a true leader and a bit of a bad boy which made opponents fear him. If it wasn't Tony I would have to pick Patrick Viera for the same reasons listed above.

Q. Favourite current Player?
Toss up between Podolski and Ramsey. Not specifically because of play, it's because of attitude. Podolski's always in a good mood and he's elated when he does well. Aaron Ramsey because I remember when he got hurt, and expectations for him coming back were ridiulcous, I have a lot of respect for him because he proved his critics wrong and he's flying now. He's Wales' best player too, haha!

Q. Favourite Arsenal moment?
Henry versus Leeds or Arshavin versus Barcelona. I find it impossible to pick one over the other.

Q.Where do you watch Arsenal in Boston?
Lir Pub. We've only been there since February 2012. It has a certain cosiness about it and all the regulars know each other. The location is fantastic and the staff are wonderful.

Q. Emirates or Highbury?
I never went to Highbury so I can't fairly say which one. I grew up with Fenway Park and I compare that to Highbury as the spiritual home. But Emirates had to happen in order for us to compete with the big boys. We lost some character but gained some extra ability, there was no other way.

Q. League Prediction?
Arsenal are capable of making a title run. We could finish anywhere from 1st to 3rd, but 1st is highly contingent on improving squad depth in January.

Q. Who will be Arsenal's player to watch this season?
Aaron Ramsey no question, it wasn't a fluke that he's got to where he is as a fan favourite. It's the combination of a lot of hard work and determination.

So that's it from Jeff and I. Remember to keep donating!!! Next stop for me is New York City, stay tuned.

Arsenal's first Champions League match of the season was a result I didn't think was going to happen and I'm quite sure that I shared the same feelings with the majority of the crowd in Boston, the first city on the American leg of my Gooner On The Road challenge.

It was my first time in Boston, having traveled 8 hours from Montreal on the typically American (and typically rickety) Greyhound Bus. The journey was scenic, winding through the hills of Vermont and passing picturesque cities like Montpellier and LeBanon (yes these are cities in the US). I also had a 'preview' of New England in Autumn (or 'Fall' as the Americans call it), with a small portion of leaves exhibiting a golden hue. I can only imagine what the place will look like a few weeks from now.


Boston itself was magnificent, you can definitely tell it's one of the oldest cities in the country, preserved buildings, cobbled streets and old tram lines make up a great deal of the character. It actually feels a lot like Downtown New York (not Midtown) with the non-grid system evident.

The highlight of my Boston experience, apart from meeting with the local Arsenal contingent, was seeing the Red Sox play at their infamous home, Fenway Park. The stadium celebrated its 100th birthday last year, and aside from the modern concessions and amenities, very little has changed. It made me realise just how much I miss Arsenal's true home, Highbury.

I was actually fortunate enough to get a ticket for $1, as the Sox were holding a special promotion where anybody with a beard can get in for 'a buck'. I heard about the game the day before it took place, so I put my razor away and kept the itchy traveler beard going one day longer - it was only once I arrived at the stadium and saw people with paper and cotton candy stuck to their faces that I realised it didn't have to be a real beard. After all, how would all the women and children get in?


Anyway, suffice to say, the Red Sox lost to Baltimore Orioles. It was my first Baseball game, and it was definitely one to remember despite the loss. It's not all doom and gloom either as it looks like there's a very good chance they will progress to the playoffs. At least, that's what I think. But then it did take me 2 hours to figure out what team was actually winning, and how the scoring works. But there you go, I gave a sport other than football a chance. Could I get into it? I doubt it, by the time it had finished I actually felt like I had aged slightly, seeing as the game was almost 4 hours long.

On to the Boston Gooners then, which is what the blog is all about, am I right? The Boston Arsenal fans watch games at the Lir pub on Boylston Street, which is almost directly opposite the Prudential Centre in the downtown core. It's a great Irish pub with loads of character, loads of wood and loads of TV screens. I met a few people over on holiday from England and Ireland, and they seemed to be having a good time as well.


I have become familiar over the past few years with the ritual of watching 2:45pm Champions League kickoffs on the US East Coast, so usually the crowd is diluted compared to the weekend. Nevertheless, the turnout for the Marseille match was great, and of course we were all pleased (and relieved) to see Theo get back on the scoresheet with a scorching half-volley.

So the next stop on the Gooner On The Road tour is New York City, home to the infamous NYC Arsenal Supporters and the Bling Pig pub where they watch the games. I've been there plenty of times but I never tire of the atmosphere there. You can see the 'Meet the Gooner Family' feature with Jeff Werner, the Boston host, later on in the week.

Finally and most importantly, remember you can donate here for the Triple Negative Breast Cancer foundation. I'm at approximately £800/$1300 so there's momentum there, but I need more volume. Please donate what you can and ask your friends and family to do the same, I truly appreciate the donation no matter how small it is.