Although, I must say, I believe that we're only really 'going to Wembley' if we reach the final. It serves as a bit of an anti-climax to know that the semi-final venue is the same as the venue for the final. You have the FA to thank for this; they made the decision because they want to recoup the costs of building the stadium, which, once again, is an example of how money is ruining the traditions of football. At the moment, we're going to Wembley, but we're not actually 'going to Wembley'. It's a bit like going out, but not going 'out out'. If I've confused you, just watch this.

We now have the best opportunity to win our first bit of real silverware since 2005. And by 'real silverware' I don't mean the Emirates Cup. It's by no means an easy feat to beat a stern-looking Wigan side that dumped Man City out of the quarter finals at the weekend, but you can be sure that there will be no assumptions made this time. We have learned our (many) lessons over the past 9 years and you have to think this lesson-learning will only add to our firepower and our drive.

The venue of choice for the FA Cup match was Herris Damansara Perdana, a food outlet in Kuala Lumpur, Malaysia. The locals here tend to head to a food outlet rather than a pub to watch the match, simply because the majority of people in Malaysia are Muslims. It makes for a nice change to the typical grog-fest of a pub viewing, although the locals still snuck a few Heinekens in for me (I have an unhealthy superstition that if there's no beer in my hand Arsenal will lose).

The Malaysia Arsenal fans are as passionate as any others that I've met on my travels so far. In fact, the one person I'm staying with at the moment is so besotted with the cannon that he's decided to paint the Arsenal crest on the bonnet of his Mazda 323. It's something you simply couldn't do in the UK, Europe or North America. And it seems you can't really do it in Malaysia either, because he's got a huge key scratch on his passenger door. 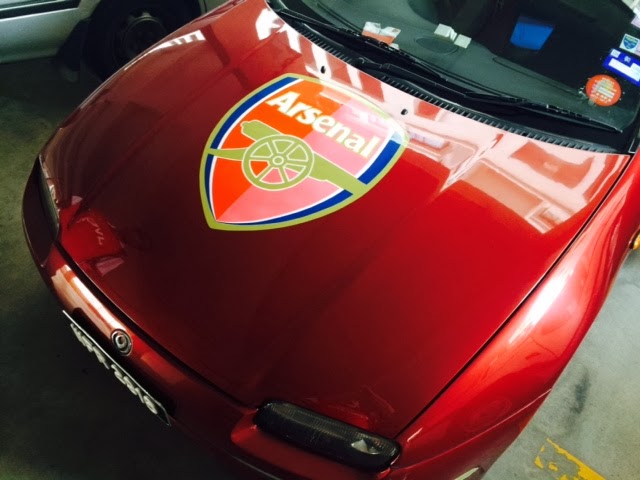 The game against Everton itself was an energetic affair reminiscent of the 1-1 league draw a few months back. Only this time we showed our superiority in the midfield department, which let's face it, is our strongest area by a country mile. I know Özil was the fan's man of the match, probably due to his contributions on the night and the way he demonstrated his mental strength [to get over the recent negativity], but for me it was Sir Chamberlain of Oxlade that gave us something hopeful almost every time he had the ball. He even lost the ball a few times but almost always won it back. I genuinely think he should be starting every game for us if he's fit enough. I've said this before and I'll say it again, as a team we are far too indirect given our potential ability to cut our oppositions defence in half. That's why players like the aforementioned Ox, Rosicky and Gnabry offer us so much, and at least one of them should be starting every game to give us that bit of dynamism that we lack when they're not on the field.

So, once again, it feels good to be an Arsenal fan. We've essentially got one hand firmly on the FA Cup despite having two rounds still to play in the competition, and as long as we keep our heads out of the clouds and show that we really want it, we'll get that monkey off our back. And then shoot him in the face.

Right then. One job complete. Tonight however, we must replicate the Great Escape in Germany. Nothing is impossible.