Meet Matt Mays, host for my two days in sunny Adelaide. Originally from Sussex, Matt was a ball-boy for Arsenal's 2001/2002 season and is obviously besotted with The Gunners. Now in Australia after moving here last year with his Australian girlfriend, he follows his team just as passionately. Unlike many of the Gooners I've met over here so far, Matt won't miss a live game no matter what
time it is locally.

Interestingly enough, Matt writes for Australian Soccer fanzine Goal!Weekly and is even writing a pilot episode for his new TV show, a kids' television programme called Kick It! TV, which educates kids about the world game. It looks like a really promising concept, so here's hoping it makes it big some time soon.

Q. Why Arsenal?
It's a bit of a cliché but it's more than just a football club. The matchdays at Highbury, full of tradition, smelling the hamburgers cooking, walking through the backstreets of North London with thousands of other Gooners. And I just love it when I meet an Arsenal fan there's already a connection. There's so much heritage with this club and we just all understand each other.

Q. Started Supporting Arsenal?
I first started supporting Arsenal in 96 or 97. I was quite good at artwork as a kid, and I used to trace football players out of this book, I started tracing Dennis Bergkamp and just fell in love him and the team.

Q. Favourite Player?
My favourite player was Robert Pires, he just oozed class and his movement on and off the ball looked so effortless.

Q. Favourite current Player?
I have a soft spot for Rosicky, I just love how he passes and moves, he speeds the game up like no other player we have in our team right now. I also love Mertesacker because of his passion, he's been a rock so far this season.

Q. Favourite Arsenal moment?
I remember celebrating with Freddie Ljungberg when he scored to beat Ipswich in 2002 - obviously we were getting close to clinching the title so there was a raucous atmosphere. You can even see me on the replays if you google the highlights.

Q. Where do you watch Arsenal in Adelaide?
Most of the time at the Rosemont Hotel, however for the breakfast games we will usually watch at Adelaide Casino as it's the only venue open and showing live games.

Q. Emirates or Highbury?
Highbury, but I understand and accept why we had to move. Highbury will also be the true spiritual home of Arsenal.

Q. League Prediction?
I don't like to tempt fate but we'll finish in the top three for sure.


Q. Who will be Arsenal's player to watch for the second half of this season?
Karim Benzema. Haha! Fingers crossed. No, seriously, there's a lot more to come from Wilshere, but it's the whole team that should be watched this season.

Don't worry. I didn't spend any of my travel fund at the casino, it was simply the (only) venue where myself and the local Adelaide Gooners could watch this week's clash against Humberside City FC.

The city of Adelaide is significantly smaller than Melbourne, its population is about 1.2 million people. That means there aren't as many football fans around, but we still managed to get a viewing party of literally 7 people for the match. It didn't help that kickoff was 6:15am local time.

The chap I'm staying with, Matt, and I, were actually up and ready despite only getting a few hours sleep from the night before. Unfortunately as we walked out the door we noticed two golden retrievers wandering around the side of the road, looking lost. I'm not making this up, and remember, my goal is to watch every game of the season wherever I am. The dogs' owner was nowhere to be seen, and Matt's friend was waiting with his car to give us a lift down to the casino. Thankfully, the dogs had identity tags on their collars and we realised they had obviously left their masters's house, just round the corner, as the front gate was open. It meant Matt grabbing hold of one's collar, me taking the other, and walking them down to the house to receive a lucrative cash reward. Instead there was what seemed like a routine 'thank you' and the ignorant owner took the dogs inside. 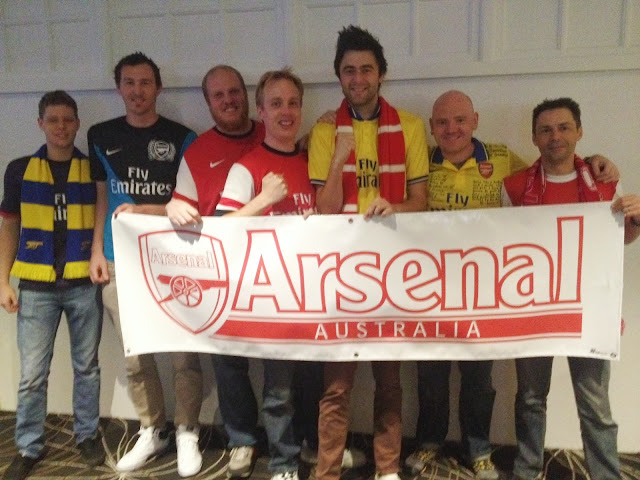 We obviously did get some good karma though; we were literally walking into the bar at the casino, when Arsenal kicked off and Bendtner (Nicky Beeeeee!) grabbed a 1st minute goal with his head. Both Matt and I were fully responsible for this goal, and we're only too happy to receive credit in the form of cash, bonds, precious gems etc.

I know we would have liked Bendtner to get a brace (not the trouser kind of brace, although he clearly needs one of those too) but we should take encouragement from the fact that he's not  a complete embarrassment on the field. It's his first start in all of eternity, and the link up play he demonstrated was generally purposeful, if not quite as superhuman as the Good Looking French Guy. I'm sure if he gets more opportunities off the bench he'll improve, but I still think he'll be packing his bags in January.

So, I'm only in Adelaide for two days. It's a really nice change from the hustle and bustle of Melbourne as its much smaller, but the weather here has been really crappy. Apparently there is a rounders game on at the Adelaide Oval as I write this, but there's also plenty of wet paint around the city that I can watch slowly dry off. As I'm being dragged along to one of these events in Melbourne at the end of the month, I don't think it's necessary for me to subject myself to extreme boredom whilst I'm here.

Tomorrow I jump on a plane to my next stop, Perth, approximately 25,000 miles away on the west coast of Australia, to watch the Everton game there.