Firstly, my apologies for this post being later than usual. It is now Wednesday, and we beat our North London Rivals on Sunday. When you consider that I was subject to the usual hospitality from the local Gooner contingent (in this case Arsenal Gothenburg), you might guess that I was in no fit state to talk, or even write up until today. I did manage to stay upright for long enough to see that we've signed some guy called Ozut Mezil, but that was by far the most active I have been up until now. 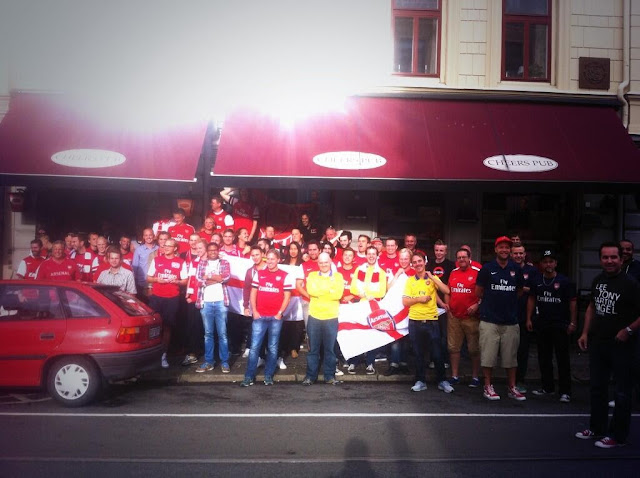 Thankfully I'm feeling a lot better today so it gives me the chance to talk about a number of happenings on Sunday.

Firstly though, I can't write about anything to do with beating Spurs or breaking our transfer record more than twice over, until I tell you that Arsenal Gothenburg, with help from the Cheers Pub in which they watch all their games, helped me to raise 6060 SEK, or £590, for my fundraiser. That's a massive contribution when you consider that the football season lasts 9 months and my goal is £10k. It gives me a lot of momentum, so for those that are reading in Gothenburg, thank you very much for the efforts.

So, it was a good old one-nil to the Arsenal. Once again the good looking French guy proved he's got what it takes to challenge for the Golden Boot this season by firing one in past his International teammate. It was a goal that made fans around the world fist-pump in ecstasy, and of course Gothenburg was no exception.

I believe the turnout was around 100 people (the video above doesn't do the place any justice as there were just as many Gooners in the room next door) and the atmosphere was, understandably because of the NLD, the best I had experienced so far on my tour. The staff at Cheers Pub were also on top form and I was literally drip-fed beer by the many fellow Gothenburg fans. It was an evening to remember, which for me, is more easily said than done!

Anyway, later on the blog we will do the customary 'Meet the Gooner Family' feature, which this time round will focus on my Gothenburg host Jesper Larsson who is, alongside the Chair of Arsenal Gothenburg Reine Björk, a complete legend in helping me feel settled in and 'at home' in Gothenburg, and of course orchestrating a very, very successful fundraising event that gets the Gooner On The Road cause flying with some real momentum.

Oh, and which team just signed Mesut Özil? That's right, The Arsenal did!